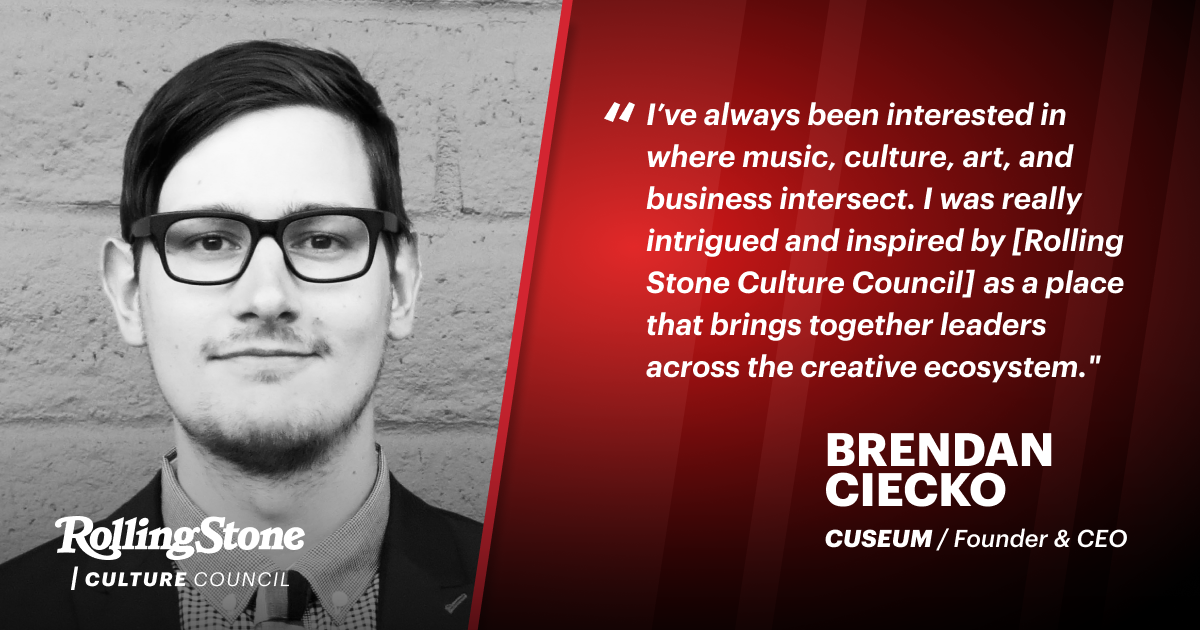 Brendan Ciecko is a tech-obsessed geek with an abiding love of art and culture — a winning combo that has informed his life and his entrepreneurial journey. “To my tech and entrepreneur friends, I'm very artistic and cultural,” he says. “And my artistic, musical, and cultural friends see me as very entrepreneurial and innovation- focused. So to have a world where all of that is swirled together is really exciting,” he says of his Rolling Stone Culture Council membership.

As the founder and CEO of Cuseum, Ciecko’s mission is to help museums and cultural organizations digitally engage with visitors, members, and patrons. That’s particularly important in a pandemic, but Ciecko started down that path long before we all began hoarding hand sanitizer.

In many ways, Cuseum was Ciecko’s answer to the question many young entrepreneurs ask themselves after they’ve been in the trenches for a few years: “What’s next?” He started Ten Minute Media, an agency that specialized in digital media and creative services for the music industry, when he was just in high school. His clients list included Universal Music, Warner Music, EMI, and Sony Entertainment, and he found himself rubbing elbows with some of the biggest celebs in the business — Mick Jagger, Lenny Kravitz, Katy Perry, Natalie Cole, to name just a few.

But after ten years in that business, Ciecko began to notice that many entrepreneurs in his network who had started out in web development had evolved from agency work to building technology products. “Looking back at that transition period, it was a really interesting psychological rollercoaster,” Ciecko says. “You have this thing that you started, you’ve been at it for over a decade, and it’s lucrative, it’s sexy, and it’s fast-paced, and it’s everything that many people live for.” But was it time to start something new and, if so, what did that “something” look like? “I kept returning to how excited and passionately and deeply in love I am with the arts and culture world,” he says.

Ciecko spent a lot of time at museums and it seemed to him that “a lot of these organizations were so far behind the curve when it came to mobile technology and new ways of engaging and interacting with the public.” He had a few meetings with some execs at cultural organizations to learn more and saw very quickly how “broken, frustrating, and obsolete the technology at their disposal was.” Ciecko homed in on audio guides — those clunky, frequently broken devices that patrons rent and wear around their necks. “In the early stages of the company, our goal was to build a platform that made it easy, and flexible, and affordable for organizations of different shapes and sizes to have a mobile guide,” says Ciecko. He envisioned a “digital tour guide that lived on the smartphone of the visitor.”

“To my tech and entrepreneur friends, I'm very artistic and cultural,” he says. “And my artistic, musical, and cultural friends see me as very entrepreneurial and innovation- focused. So to have a world where all of that is swirled together is really exciting,” Ciecko says of his Rolling Stone Culture Council membership.

And so Cuseum was born in 2014, nurtured by two world-class startup incubators and accelerators: PayPal’s StartTank and Techstars. A software as a service company, Cuseum provides a white-lable framework that helps cultural institutions such as museums, zoos, aquariums, and historic sites digitally engage with patrons via mobile apps, digital membership cards, and augmented reality experiences. Ciecko says Cuseum is celebrating its 400th customer this month.

The pandemic has been keeping Ciecko on his toes, as his clients, suffering from both closures and rules that limit capacity, are using Cuseum’s tools to amplify their remote content. Cuseum also launched a new app called [AR]T Museum that offers virtual museum tours and uses augmented reality to let users see what, say, a Kandinsky would look like on their living room wall. But his proudest accomplishment has been bringing together cultural leaders worldwide to discuss strategies for digital engagement during the pandemic.

“We'd never done a webinar or a podcast, and were always heads down in the work that we do,” says Ciecko. “But we saw it as a critical part of our mission to help these organizations succeed in emerging technology. The pandemic was a new unknown for everyone.” He planned Cuseum’s first webinar in March and 4500 people registered. “It ultimately became the go to thing to do on Wednesday at two o'clock, whether you were in Abu Dhabi, Singapore, Boston, or LA,” says Ciecko. “This global audience came together overnight to talk about the most effective ways to engage audiences.” To date, there have been more than 90,000 registrations for the webinars. “Building that community was a really exciting milestone for us as a company,” says Ciecko.

Rolling Stone Culture Council was a perfect fit for Ciecko. “I’ve always been interested in where music, culture, art, and business intersect,” he says. ”I was really intrigued and inspired by [Rolling Stone Culture Council] as a place that brings together leaders across the creative ecosystem.” He suspects that the Culture Council may not have a critical mass of members in the art and museum space, so he’s looking forward to writing content that will address innovations in his world as well as “the aha moments I’ve had throughout my entrepreneurial journey.”