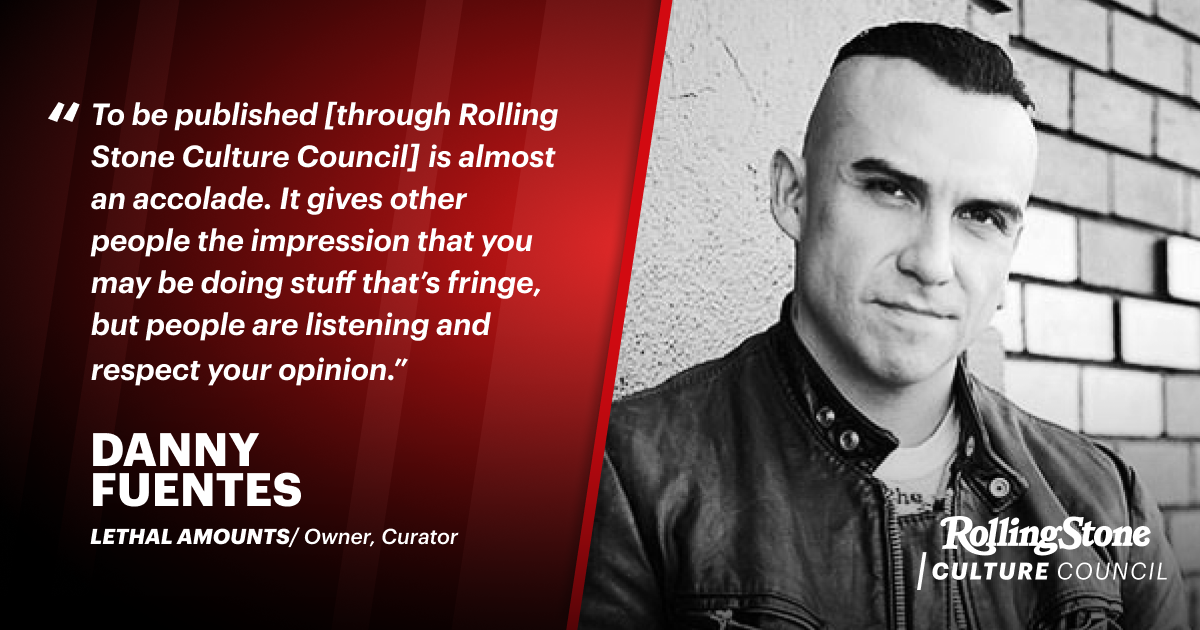 It all started with a tattoo. Danny Fuentes had designed a logo that he says was “a representation of punk culture in Los Angeles”: two open safety pins positioned as the letters L and A. He decided to have the design tattooed on his neck. “I got one too many compliments from one too many important people and it seemed to me that I had stumbled upon something that I could capitalize on,” says Fuentes. That tattoo design eventually became the logo for Lethal Amounts, a gallery that features subculture emerging artists and live music events.

Initially, though, Fuentes thought he’d simply make and sell t-shirts featuring his design. He’d been in the music industry and describes himself as a “glorified groupie” who traveled with bands, managed tours, did personal security, and eventually booked his shows. He understood the power of merchandising and branding, but knew nothing about the fashion industry. When he approached clothing stores that he imagined would carry his t-shirts, the response was disappointing. It was 2011 and the economy was not in good shape, so retailers were not eager to take chances on brands that were not already well-established and guaranteed to fly off the shelves.

“Before I heard too many discouraging comments, I just decided to take a leap of faith and open up my own store,” says Fuentes. He found a space that was off the beaten path but still close to downtown. To draw customers to his grand opening, he decided to entice them with an art show. “Having been a promoter and with my rock and roll background, I knew I had to give people something to look at,” he says.

He called his friend Angelyne, an iconic, self-made LA celebrity who engineered her own fame in the ‘80s through billboards displaying nothing more than her Jane Mansfield-esque image and her phone number. “She’s a cult figure,” says Fuentes. “It’s like seeing a unicorn cross the street when you see her.” Angelyne agreed to let Fuentes exhibit some of her memorabilia at his store’s opening and showed up at the event in her pink Corvette. “To me, it explained our ethos,” says Fuentes. Like Angelyne, he would not wait for anyone to open the door to success — he would own the door himself.

“Once I looked into [Rolling Stone Culture Council] and saw the kinds of people who were involved, I was very flattered. It felt nice to be included as a member of a group that contributes to culture.”

The opening of Lethal Amounts was so successful that Fuentes decided he needed more of the same. He leveraged his connections with musicians, artists, and photographers and began hosting exhibitions on a regular basis. “Once we were doing it for a year, we were getting contacted by very big names,” says Fuentes. “And the t-shirts got totally eclipsed by the gallery.”

“I can confidently say that I don’t think there’s another gallery in the world like ours,” says Fuentes. “We merge the gap between the visual and the audio, two forms of art that are often not so connected.” He admits to learning the business end of Lethal Amounts by “the seat of my pants,” but has mastered the art of hiring people to fill in his knowledge gaps.

During COVID, he got creative in order to keep the business going, even during lockdown. “I was in a little bit of a panic mode,” he recalls. Online events just didn’t feel right to him. So he reached out to his community of artists and photographers, who were also struggling, and suggested they partner with him to create limited-edition merchandise and split the profits. “We just went down the list of everyone we had worked with and to my astonishment, sales were through the roof,” says Fuentes.

He also began making documentary films featuring selected bands and how they were coping during the pandemic — were they writing new material, finishing an album, going crazy? “We splashed in some elements of live performance in the studio and it was great,” says Fuentes. He did the films with a handful of bands and says he’s now considering marketing the series to streaming platforms.

When he was invited to join Rolling Stone Culture Council Fuentes says, “once I looked into it and saw the kinds of people who were involved, I was very flattered. It felt nice to be included as a member of a group that contributes to culture.” He’s found value in participating in the community as a contributor to Expert Panels and articles. “To be published [through Rolling Stone Culture Council] is almost an accolade,” he says. “It gives other people the impression that you may be doing stuff that’s fringe, but people are listening and respect your opinion.”