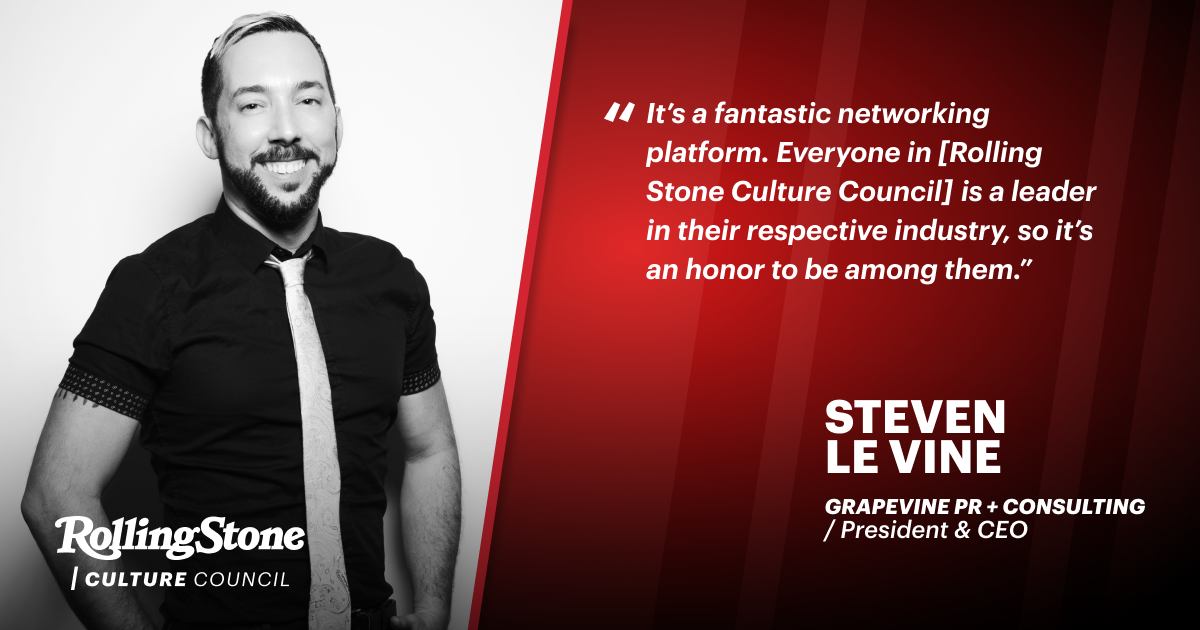 Many entrepreneurs in Steven Le Vine’s industry earn their chops at agencies before striking out on their own. But Le Vine chose a different path; he spent just a year in corporate PR before starting his own company, grapevine pr + consulting. “Everyone around me was saying, ‘what are you doing? You’re in first year and you’re throwing your career away,’” he recalls. “Even though it was really scary, it was the right thing to do. I needed to trust my instincts.”

It was Le Vine’s love of music that inspired him to go into the PR industry. “I was obsessed with artists like Tori Amos, Lisa Loeb, and Alanis Morissette, and I used to share albums and evangelize them,” he says. When he was still working for a PR firm, his father introduced him to a jazz musician, and Le Vine started a side gig, working to develop the artist’s brand. When he officially started grapevine with a partner, Stephen Lucin, in 2006, his niche was entertainers as well as LGBTQ clients. Among his high profile entertainment clients was Monte Pittman, Madonna’s longtime guitarist. “We got to go on tour with [Madonna] and do press for [Pittman] all over the world, and that was really fun,” says Le Vine.

In its first few years in business, Grapevine earned a solid reputation as one of the first PR firms focusing on the LGBTQ niche. “A little over a decade ago, there was a larger ecosystem of LGBTQ media and clients positioning themselves based on their identity,” says Le Vine. “As a gay man, I could relate, and I wanted to give LGBTQ artists and entrepreneurs exposure and also to help mainstream businesses reach the LGBTQ market.”

While the company still serves that market, it has expanded its client base to other industries, including technology, consumer brands, celebrities, and high-profile experts in various fields. “When we decided to rebrand, I was a bit nervous about it, but it’s worked out very well,” he says. The company has worked for Lisa Loeb; William Shatner; fintech companies; a prominent spinal neurosurgeon; and a number of coaches, authors, and speakers.

[Rolling Stone Culture Council] brings a lot of value to me, and I hope that I can bring just as much value to the council and to readers.”

The past year has been grapevine’s busiest, Le Vine says. “I was fearful that it was going to go the opposite way, so I’m very grateful,” he says. While the company did initially lose several clients due to supply chain issues, Le Vine says that nine out of ten came back when restrictions eased up. And the company quadrupled its client roster in a matter of months. He attributes that success to a number of factors, including bringing on a new partner, Garrett McClure, as chief strategy officer to “help drive strategy and grow the business.”

Le Vine also says that he had been saying yes to too many projects and spreading the grapevine brand too thin. “I started thinking about why I got into PR in the first place — who I really want to work with and who I derive joy from working with,” he says. “This mindset really allowed us to move forward and remain fully invested in our clients and how we can best support them and their efforts, and in doing so, help them to serve others.”

As a long time fan of Rolling Stone, Le Vine says that being a part of Rolling Stone Culture Council brings him full circle — from tossing the magazine into his parents’ shopping cart every month as a teen, to having the opportunity to contribute his own perspectives on PR, entrepreneurship, and culture by publishing content via the Culture Council. And, he says, “it’s a fantastic networking platform. Everyone in the council is a leader in their respective industry, so it’s an honor to be among them. It brings a lot of value to me, and I hope that I can bring just as much value to the council and to readers.”