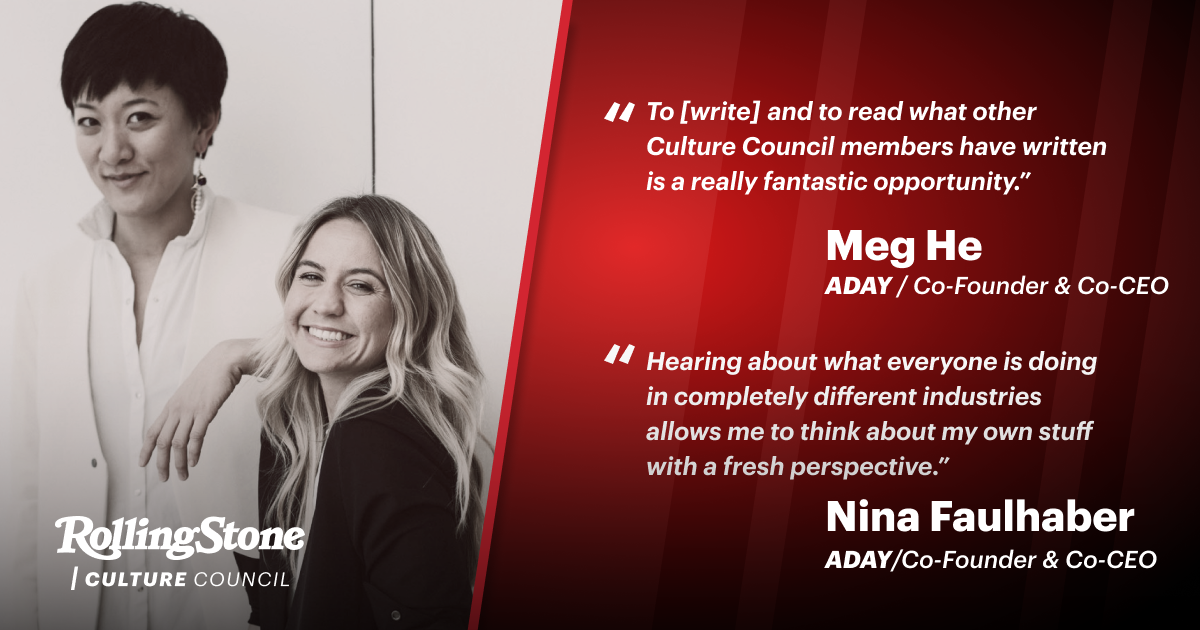 Nina Faulhaber and Meg He knew very little about fashion when they started their company, ADAY, but they had a shared vision of the brand they longed to create. “The idea is that a few high-quality, functional, breathable, really beautiful comfortable pieces can replace many, many garments you currently have in your wardrobe,” says Faulhaber. ADAY co-founder He says that the two were initially less interested in apparel per se than in “making life easier for our customer. And eventually that morphed into creating this new standard of clothing for them.”

Faulbaber and He met when they were analysts at Goldman Sachs in London ten years ago. But both women ultimately felt pulled toward entrepreneurship, partly inspired by post-Goldman stints in venture capital, where they were exposed to the world of startups and technology at different firms. After Goldman, He headed to Stanford Graduate School of Business and worked for a VC firm while studying, and Faulhaber worked at a venture firm in London.

They kept in touch, visiting one another and frequently lamenting that their professional wardrobes were often uncomfortable and difficult to care for. “I wanted to understand what was going on in Europe, and Nina wanted to understand what was happening on the West Coast,” says He. “So we would have these conversations, about what we were seeing and ask ‘what does the future look like?’” The idea for ADAY began to take shape — a sustainable, stylish, beautifully designed wardrobe of staples constructed with the kinds of technical fabrics found in their favorite yoga gear and athleisure wear.

“The more people we spoke with, the more we managed to flesh out what this looked like. I think it doesn't matter whether you have the knowledge already or not. The most important thing is that you have the hunger, the will, and the drive to go and figure it out.”

“I had always known that my interest was at the corner of fashion, ecommerce, and technology,” says He. When she graduated from Stanford, she went to work as a product manager at Poshmark, where she gained industry knowledge and confidence. “I think that was one of the key steps that eventually led us to start ADAY,” she says. When family concerns brought He back to London in 2014, Faulhaber convinced her that it was time to start a company together. “During my time in venture, I built a huge network of people that turned out to be a great resource,” says Faulhaber. “If you’re going into a space that you have no clue about, like apparel and fashion, you can literally ask anyone anything and no question is a stupid question. Sheer curiosity and not being shy to ask can go a very long way.”

So the co-founders asked a lot of questions — to contacts at Nike, Lululemon, Patagonia, and Everlane, among others. “The more people we spoke with, the more we managed to flesh out what this looked like,” says He. “I think it doesn't matter whether you have the knowledge already or not. The most important thing is that you have the hunger, the will, and the drive to go and figure it out.”

From the start, He and Faulhaber had a “go big or go home” vision. “Venture capital trains you to think big,” says Faulhaber. “Companies that want to raise venture money and grow fast have to be really audacious and bold in terms of their ideas and their vision. As we mapped out our own vision, we took that very much to heart.”

And they were nothing if not audacious. When advisors told them a Portuguese factory would be the top choice to produce their apparel, the co-founders called the factory but were repeatedly given the brush off. So He and Faulhaber hopped on a flight and simply showed up at the factory in Porto. “They kind of had to take the meeting with us because we were there,” recalls Faulhaber. “They ended up spending a whole day with us. We were the first pre-launch brand they ever worked with and to this day, we still work with them.”

“Companies that want to raise venture money and grow fast have to be really audacious and bold in terms of their ideas and their vision. As we mapped out our own vision, we took that very much to heart.”

The co-founders found ADAY’s first designer on Instagram, got their first seed capital from Faulhaber’s former boss at Index Ventures, and hired a former Everlane production manager to help bring the designs to life. “For almost two years, we didn't do any paid marketing,” says Faulhaber. “It was all about organic community building to see if our product resonated.” It did. ADAY developed a loyal following of customers who shared Faulhaber and He’s passion. A year ago, the company raised a whopping $8.5 million in Series A funding to further pursue its vision.

However, the pandemic changed that vision radically. The brand had been launched with a direct to consumer, ecommerce business model, but the co-founders had started building permanent and pop-up stores in San Francisco, New York, and London. They had also launched a line of suiting. Now, says Faulhaber, the focus is back to online sales and “we’ve gone completely back to what we were always about, which is pieces that do more with less, regardless of the category.”

As members of Rolling Stone Culture Council, the co-founders are looking forward to connecting with other members and to contributing content. “Writing is a great way of sharing ideas,” says He. “To [write] and to read what other Culture Council members have written is a really fantastic opportunity.” She’s also hoping that fellow Culture Council members may have some thoughts on finding new board members. “Just hearing about what everyone is doing in completely different industries allows me to think about my own stuff with a fresh perspective,” adds Faulhaber. “I hope we can all create fuel for each other.”