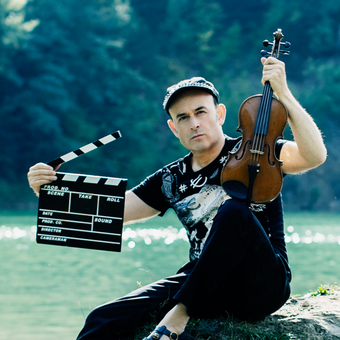 Aleksey Igudesman is known as a violinist, but has also established himself as a composer, conductor, actor and film maker. Igudesman's compositions are published by UNIVERSAL EDITION and his compositions have been performed world wide by soloists, ensembles and orchestras, such as the New York Philharmonic and the Chicago Symphony Orchestra, often with him as a solo violinist and conductor. He has written for and performed as a soloist on several movie soundtracks and worked closely with Academy Award winning film composer Hans Zimmer on numerous movies. Igudesman has directed, produced and starred in the feature length mokumentary "Noseland", featuring Julian Rachlin, John Malkovich and Sir Roger Moore. Noseland has been premiered in 14 festivals around the world in 2012/2013 and won the "Most Entertaining Documentary" award at the Doc Miami International Film Festival. Together with the pianist Hyung-ki Joo, he appears as IGUDESMAN & JOO. Their shows "A Little Nightmare Music" and "BIG Nightmare Music" with symphony and chamber orchestras, have received much acclaim around the world and clips have been watched on YouTube over 30 million times. They have performed with Gidon Kremer, Julian Rachlin, Janine Jansen, Viktoria Mullova, Emanuel Ax, John Malkovich among others. In 2016 Igudesman co-founded Music Traveler together with Julia Rhee, a mobile, online platform which aims to centralize and facilitate the renting and leasing of spaces with pianos or other musical instruments for practice or rehearsal. He is also the founder of Amuse News, a humorous music news channel on YouTube. Aleksey Igudesman plays a Santo Serafin 1717 violin, kindly loaned to him by ERSTE BANK and a bow by the modern bow maker Benoit Rolland. www.alekseyigudesman.com www.igudesmanandjoo.com www.musictraveler.com www.mtprods.com www.amuse.news

When your usual outlets aren't available to you, it's important to find alternate coping mechanisms.

Music Traveler is a P2P platform that helps musicians share just about any space where music is made. Our team is made up of accomplished musicians who believe that nobody should have to spend hours looking for space when smart solutions exist to help people create music together. We've made it easier than ever to book a rehearsal room or book a venue and are dedicated to developing new services that help musicians create.