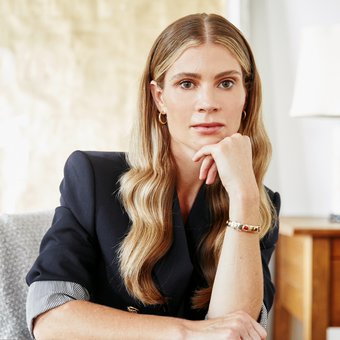 An avid art lover who serves on the North Carolina Museum of Art’s (NCMA) Board of Trustees and Acquisitions committee and the founder of the NCMA’s Matrons of the Art initiative, Eli is well- respected within the art world among top artists, collectors, gallerists, and museums. Many of these are involved with Matrons & Mistresses, a non-profit publication she directs that highlights the invaluable role women play in the arts—though Eli is equally proud of the connections that M&M makes to readers who are just beginning their love affairs with art. For, as she wrote in her initial letter, “a discouraging amount of people choose not to engage in the art world because they find it intimidating, inaccessible, and overly academic. It is for these people (for I used to be one of you) that I write. I write to share with you what I love and what feeds my soul: stories, artworks, and women (Matrons and Mistresses) whose relevant and vulnerable works deepen and enrich our world as a whole.” In addition to her work with the NCMA and Matrons & Mistresses, Eli is the founder of EMC Spaces, an art acquisitions and design consulting firm committed to co-creating spaces which reflect the passions and values of the people who inhabit them. Ingrained in all that she does is a true belief in the power of design, storytelling, and art to shift one’s perspective and touch one’s heart.

When your task list becomes overwhelming, try one of these methods for prioritization.

In 1947 the state legislature appropriated $1 million to purchase a collection of art for the people of North Carolina. The appropriation, which was unheard of at the time and drew national attention, was in response to a then-anonymous challenge grant from noted philanthropist Samuel H. Kress of New York through the persuasive efforts of Robert Lee Humber. Humber was an international lawyer and native of Greenville, N.C. Humber worked tirelessly with the legislature to ensure the bill’s passage. An amended bill was finally passed in the waning hours of the last day of the legislative session. Rep. John Kerr of Warren County, in support of the bill, famously said, “Mr. Speaker, I know I am facing a hostile audience, but man cannot live by bread alone.” The initial $1 million legislative appropriation was used to purchase 139 European and American paintings and sculptures. The Kress Foundation matched the $1 million appropriation with a gift of 70 works of art, primarily Italian Renaissance, adding the Museum to its program of endowing regional museums throughout the United States with works from the Kress Collection. The Kress gift to the Museum became the largest and most important of any except that given to the National Gallery of Art. The Museum’s original collection, along with the Kress gift, established the North Carolina Museum of Art as one of the premier art museums.