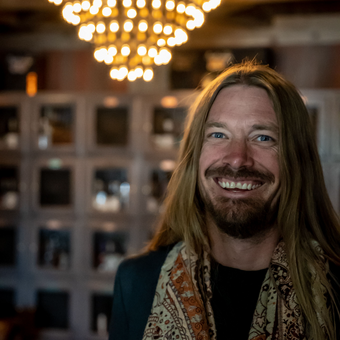 Philip Wolf is a recognized pioneer and CashoM (Professional Stewrd and Server of Cannabis) who elegantly guides people through the myriad, positive properties of cannabis and the art of pairing it with food. This new level of connoisseurship developed by him empowers individuals to identify aspects that allow them to safely, and consciously consume cannabis, therefore enhancing everyday life experiences. He’s a 12-year legal cannabis industry veteran who started out opening medical dispensaries in 2009. Since then, he founded Cultivating Spirits (Colorado, Las Vegas and California), co-founded the Cannabis Wedding Expo (Denver, San Francisco, Los Angeles, Las Vegas, Boston and Toronto - New York/Chicago in 2022) and is building CashoM. His focus: to bridge the gap between mainstream America and cannabis through experience and lifestyle. Since his dispensary days, the legal cannabis market expanded, and so did he, founding a cultivation consulting company and working with a Wall Street banker/investor to open OBT Ventures, a holding company focused on the ancillary side of the plant. OBT Ventures inspired Philip to do the work he was born to do: open the minds of Americans to the benefits of cannabis, and showcase them in the form of celebration, ritual and elevated dining. Philip has been featured on CBS Nightly News, Rolling Stone, Time, Bloomberg, Vice, Entrepreneur, The Guardian London, Playboy, Men's Journal, and more. He’s appeared Facebook documentary style videos with over 12 million views, and starred in an episode of the popular television show Bong Appetit, which airs on Viceland. What’s in his wheelhouse: ‘Mastermind’ - Newsweek 2015 ‘Pioneer’ - Stated by High Times in 2016. Cultivating Spirits is the first company in the United States to offer cannabis dining experiences to the public, 2014. Conceptualized the cannabis pairing process, pairing terpene profiles of Cannabis with flavor profiles of food to harmonize and enhance safe and elevated dining experiences. Produced the first legal cannabis dinner in the United States that was approved by a municipality and the X Games 2015, Aspen The Cannabis Wedding Expo is the first exhibition to combine cannabis with traditional wedding market verticals and traditions. Created the hospitality program for the first cannabis resort, CannaCamp, 2015 Founder - Noted as a “Master Mind” by Newsweek, 2015 Colorado Cannabis Caregivers - 2009: Mmj dispensary in Colorado Springs Wolf Consulting - 2010-14: A cannabis cultivation consulting company in Colorado. Clients included, High Country Healing, Broadmoor Wellness and Natural Mystic Wellness Center Hispanola Health Partners - 2013-18: A 501(c)3 nonprofit that was created to assist local communities in their efforts to improve the quality of life through high quality, low cost healthcare services in Haiti OBT Ventures - 2013: A holding company that included Spiro Tours, CannaContainers and Cultivation Consulting Cultivating Spirits - 2014-18: Specializes in crafting, hosting, and producing cannabis pairing dinners. Colorado and Las Vegas Cannabis Wedding Expo - 2015-19: An exhibition bridging the gap between traditional wedding and cannabis. Denver, San Francisco, Los Angeles, Las Vegas, Boston and Toronto Cultivator - Designed and set up 8 production facilities. Produced over 1,500 pounds of premium grade cannabis. Trained over 15 growers who are still using his techniques today. Philanthropy - Founded Hispanola Health Partners a registered 501(c)3 nonprofit. Started a Health and leadership camp ‘Help Kids Win in the Dominican’, Dominican Republic (2012-2013) and opened a primary health care center in Haiti (2016). Radio and Television - Directed, hosted and produced the first television show for Pikes Peak Community College ‘Life’ that aired on local PPCC TV television. Other media moves: hosted a radio show: Campus and Community Chat, KEPC– 89.7 FM for 2 years, and was a local sports reporter in Colorado Springs. Education Associates Degree in Telecommunications from Pikes Peak Community College. Won the 2008 ‘Most Outstanding Service Award’ for work in the Radio and Television Program. Nonprofit Management 200 Hour Yoga Teacher Training

12 Reasons Why You Should Slow Down When Growing Your Business

Slow growth may seem counterintuitive, but it could actually lead you to greater success.

The Importance of Empowered Cannabis Consumers

How do we get consumers to the point of being their own guiding light?

Why Cannabis Brands Should Prioritize Intention and Conscious Consumption

To find the right match, you’ll need to look beyond their technical skills.

The first company in the United States to offer legal cannabis dinners to the public. Our goal is to teach you the importance of becoming a cannabis connoisseur while enjoying world-class food and intellectual conversation while smoking, not infusing. Cultivating Spirits brings in executive Chefs and a specially trained CashoM while producing a dinner that is sure to enlighten and cultivate your spirit through food and cannabis.