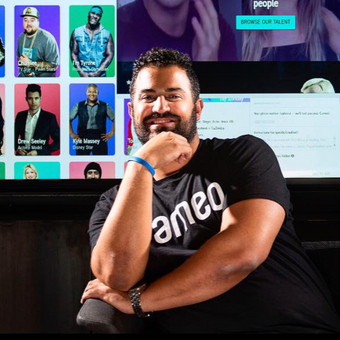 Steven Galanis is an American entrepreneur passionate about building strong lasting relationships predicated on integrity, respect, and mutual trust. His passion for connecting people led him to found Cameo, a marketplace where fans can book personalized video shoutouts from their favorite people, with Martin Blencowe & Devon Townsend. Recognized as one of “Hollywood’s Top Innovators” by THR (The Hollywood Reporter), Steven has been named “40 under 40” by Crain’s Chicago Business and “Innovator of the Year (B2C)” by Chicago Inno. Cameo has forever altered the way fans can interact with their favorite celebrities. In 2020, Cameo topped Fast Company’s list of the “World’s Most Innovative Social Media Companies” and was named one of the “World’s 50 Most Innovative Companies.” In 2019, Cameo took home the prestigious Momentum Award given annually by Tech Incubator 1871 & the Chicagoland Entrepreneurial Center. Cameo was named one of the "50 Most Genius Companies" by Time Magazine in 2018. Cameo is well known for its legendary corporate culture centered around four core values (Roll Out the Red Carpet, Run Through Walls, Fight for Simplicity, & Make it Memorable). Cameo has been named one of America’s Best Startup Employers by Forbes (#19) and LinkedIn (#32). Cameo functions as a distributed team with hubs in Chicago and Los Angeles. To date, Cameo has raised over $65M in venture capital from some of the world’s top investors including Seed (Starting Line, Chicago Ventures, & Origin Ventures), Series A (Lightspeed Venture Partners, Bedrock, Pritzker Group), & Series B (Kleiner Perkins, The Chernin Group, Bain Capital Ventures, & Spark Capital). Outside of Cameo Steven is an active member of the YPO Chicago Chapter and the Economic Club of Chicago. Steven also serves on the Board of Directors of Habitat for Humanity Chicago and on Duke University's Young Alumni Development Committee.

Co-Founder & CEO of Cameo. Named "50 Genius Companies of 2018" by Time Magazine, Cameo is a marketplace where fans can book personalized video shoutouts from their favorite people. We currently partner with over 30,000 of the world's top actors, athletes, and influencers to create the most authentic and personalized fan experiences in the world. Check us out at www.cameo.com.